I've been a blood donor for many years. I have donated several gallons of blood. In April 2010 I got called to donate something a little more substantial - bone marrow.

Some time ago, I registered on the National Bone Marrow Donor registry. Ironically, I had put it off because the probability of my type being needed was rather low. My tissue samples waited in cold storage for a long time and I was just a number in a database until a leukemia patient's doctor typed him and entered a search request. Normally patients wait for years to find a donor, or die waiting for one. To their fortunate surprise, an immediate match was available - me!

Bone marrow is the material inside your body that makes blood cells.

Leukemia is, essentially, blood cancer. There are many ways to treat it, typically with chemotherapy. In this case, the recipient has already been through chemo, recovered, and relapsed. The easy treatments haven't worked.

Essentially, they obliterate the patient's own marrow through high-dose chemotherapy. It is so severe that he will need to stay in a sterile environment because he'll have no immune system. You can't even send flowers because the bacteria inside may cause a fatal infection.

Bone marrow transplants have a reputation for being very painful. While it won't tickle, there are a lot of advances that make it much less painful for donors than it was 10 years ago.

Even better for me, we used a new procedure called Peripheral Blood Stem Cell harvest. With this procedure, they injected a drug called Filgrastim into me about 5 days before the harvest. This drug caused my marrow to overproduce blood stem cells. They then went in through a soft, shallow spot in my arm to pull these cells out. They extracted blood, spun it in a centrifuge, removed the stem cells, and give me back the rest of the blood through an IV needle in other arm.

The procedure itself is very much like donating blood or platelets. Since the spot they extracted from is not very sensitive, no anesthesia was needed. The Filgrastim did cause some minor aches, easily treated with a high dose of generic Tylenol. In fact, I had more pain by getting an upset stomach from all the Tylenol than anything else.

If this less-invasive procedure had run into a problem, the alternative will be to drill a few tiny holes in my back and into my pelvic bone where they can extract raw marrow. This is obviously more invasive, but they do it through a thin spot in the muscle so they don't do very much damage. Formerly, marrow was extracted from the femur, the big bone in your upper leg. This required them to cut through several inches of muscles which led to lots of pain and long recovery time.

My harvest took place December 22nd and I was back to my normal day-to-day self by the end of the year, and biking, hiking, and running within a few weeks.

Many people have asked me why I would do this for someone I do not know. The reason is simple - I would want someone to do it for me or for someone I love who is in the same situation.

Bone marrow regrows in just a few weeks. It would be different if they needed a kidney - something that won't automatically replace itself. In the grand scheme of things, this is trivial for me and life-saving for the recipient.

Privacy laws largely restrict contact between donors and recipients. I know that the recipient was a male in his mid-50s. I know that the marrow engrafted correctly and he was released from the hospital. I also received a nice, unsigned Christmas card from them and was allowed to send a letter back.

Some states prohibit donors and recipients from ever contacting each other, and I do not know if the patient is in one of those states. Those states that do permit it have a one-year minimum waiting period, in case the recipient needs a second transplant.

Impressions of the process

For as amazing as the process is, it's very casual. There was a lot of "hurry up and wait" between April and December. Due to complications preparing the recipient, the procedure was postponed several times.

The procedure itself took hours, but it was mostly just laying around letting the machines do their thing. I watched a bunch of MythBusters in between talking to other donors next to me. The procedure was in a relaxed outpatient clinic, not a surgical theater.

What really amazed me was that there was absolutely no pressure to donate. Everyone I came in contact with was pretty matter of fact about it. They were very clear that you could decide not to donate for any reason or no reason. Then again, it's not like it took much convincing.

If you are thinking about registering, my suggestion is to do it. You can worry about whether or not to donate if you actually get a match. If you do match, my recommendation is to do it - especially if you can do the PBSC procedure (which, I think, most procedures are these days.) 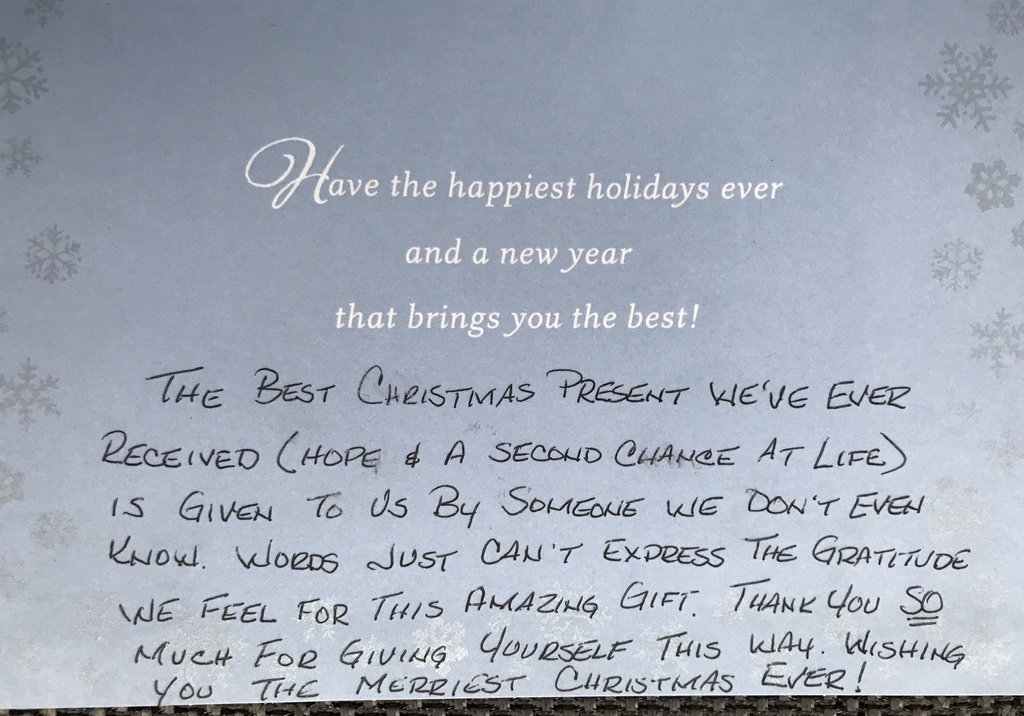 A nice card I got from my recipient.